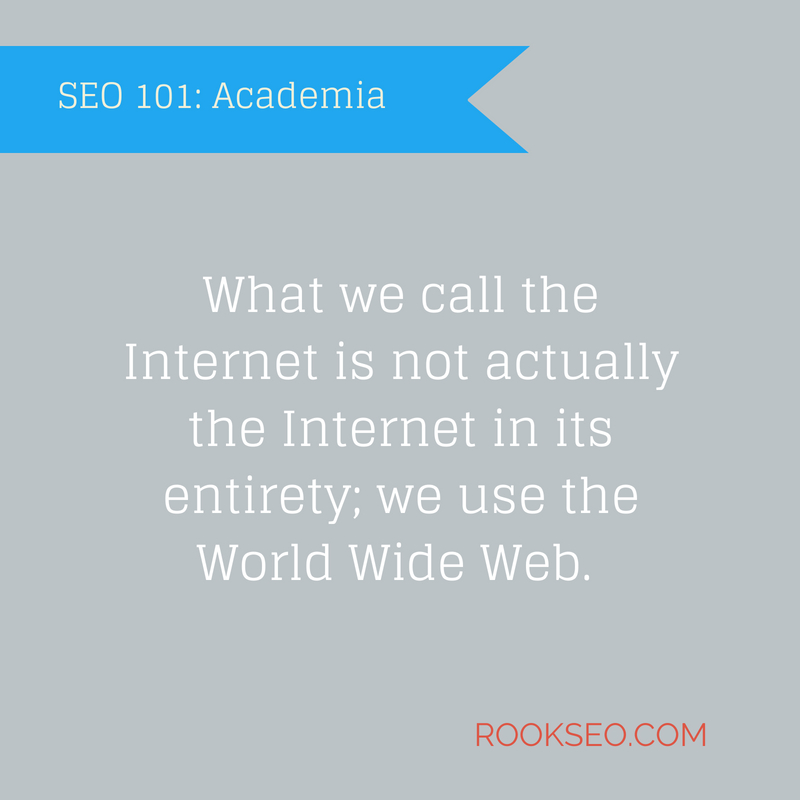 This is part two in a seven part series. If you landed here, we highly recommend you read the other parts by starting here.

If you've read part one, Fundamentals of SEO: Start Here you know that we're talking about Search Engine Optimization, how it works, and how you can implement it safely and practically without having to be a whiz kid from Soviet-era Russia. This is designed for people just like you: entrepreneurs, bloggers, business managers and the like. So if you have questions, please let us know. We want to make sure you grasp this as clearly as possible.

The Internet: Not What You Think It Is

For anyone reading this with a degree in computer science, let me apologize right now. I know this information is not 100% technically accurate. That's not the point. The point of this is to distill complex information down to a level where people like your mother could understand this. For those of you who aren't computer scientists, I hope you understand I'm eliminating a complex history of systems, creation, dates, and data to ensure you can actually understand this. While not quantitatively correct, this information is qualitatively correct and more than anything: actionable.

Al Gore created the Internet. That should make you laugh, and if you are under the age of 25, just Google that phrase and you'll get the joke. In all reality, though we have to look at what the Internet actually is before we can talk about how to use it to our advantage.

You see, what we call the Internet is not actually the Internet in its entirety; we use the World Wide Web. The Internet got its routes back in the 1960's for something called ARPA Net, which was designed to help the military communicate with submarines. In fact, email, the amazing technology we take for granted was invented to allow military units in the field to communicate with their logistics teams and the Pentagon.

Over a few decades, the Military worked with schools like The University of Utah, Stanford, Michigan, etc. to help find and develop programmers and computer scientists who could help service these emerging technology skills (fun fact Ed Catmull of Pixar fame was one of these students at The University of Utah working on ARPA Net as he discusses in his book Creativity Inc).

The Internet is much deeper and profound than you and I could ever understand. There are graphs showing that the world wide web incapsulated only a small percentage of the data that exists "online". It's often compared to an iceberg where only 10% of its mass is sticking up out of the water with 90% of its structure resting below the surface.

Occasionally, we see glimpses of this sublevel mass but it's usually not good. Examples are: The FBI shutting down the silk road where they traded in all things nefarious including people, someone selling plans for a US drone, or even catching a drug dealer from the deep web because he attended a beard competition in the US. You can see more examples here.

When we refer to SEO, however, we really are talking about the world wide web, and more specifically find out what search engines actually crawl and index (remember that the Internet is a cesspool of information). So, our goal is to make sure that search engines like Google love our content to it gives us preferential treatment in their index and rank us higher than our competitors.

To understand how to do that, we have to look at how Academic process and infrastructure had a major effect on the early days of the Internet and how that legacy has continued until this day.

If anyone could be considered the founding father of the Internet its this guy. Tim Burners-Lee was working a CERN studying Nuclear Energy. As he was working on his research, he realized there had to be a better way to categorize research papers (smart students will remember this for the test). His goal: to make the most relevant (another term to remember) research papers show up at the top of the results. He did this by identifying the subject of a paper, say Mitosis and Meiosis for example, and started organizing them how often that phrase showed up in the paper. The thought being, the paper that mentions the subject the most is probably what the paper is most about. This makes sense. A paper that isn't about something won't talk about it and a paper that talks most about something is probably the paper most about that subject.

This is the fundamental principle of SEO and a must know for anyone attempting to implement this properly. You cannot be relevant for something if it does not show up on the page. This is like saying you want to win the lottery but never buying a ticket. It will never happen. I promise you. So you have to put the words you want to show up for on the page. Plain and simple.

This isn't the end of the story, however, because Tim Burners-Lee and his cohorts at CERN realized that they could leverage the Internet to connect with other organizations who specialize in research papers. So, logically, they put together a list of these organizations that had:

Out of anything you could possibly imagine, there's a clear winner on who they worked with first and that was Universities. Internet connections were expensive and required specialized training, the kind of training the US Military had been investing in with the University programs. So that is where they went and sure enough, it further anchored the infrastructure of categorizing and sorting content like they were a research paper.

Jump forward to 1994 when a group of students at Stanford decided they could use this same infrastructure to categorize web pages and websites online. These kids started a little company called Yahoo!

Yahoo and The Directory Era

I'm not sure if those kids at Stanford knew what they were doing when they developed their approach to categorizing the Internet, but we can thank them for much of the world we live in today. You see, although they weren't the first and although they were eventually buried with better technology, they started a process that has helped every single person on this planet, whether or not they know it: they began to index the Internet.

When we think about modern search engines we imagine giant server farms with tens of thousands of servers sending "spiders" out to crawl the world wide web looking for and following every single link they can possibly imagine. These spiders (also known as bots) are important because they scout out the unknown recesses of the Internet and then allow search engines to process that data and understand its value through their own proprietary algorithms (or AL Gore Rhythms if you want another bad Al Gore joke).

Yahoo! at the time was not a true search engine because they did not go out and look for websites to then index them. They made you submit your website to their directory, just like a phone book. Again, this made sense. At the time. If you ever needed to find a butcher, plumber, maid service, lawyer, dentist, doctor, or any other service provider or vendor, you would go to the Phonebook.

So, they moved this process to the Internet and made it easy for you to find what you were looking for. after you submitted your website to the index, they would then crawl your website and put your homepage to the relevance test.

Naturally, other people started copying them and we saw the rise of many copycat directories like Lycos, Altavista, Ask Jeeves, etc. But, there was one major issue with this process of early Internet Marketing: It was easily gamed.

In the day of the Rug Rats, Doug, Hey! Arnold! and the like, many of us were just learning to use the Internet properly. Myself, I was living in a small town in rural Oklahoma called Tupelo. There were no stop lights, and we had two stores kiddy corner from each other both offering the same type of gas. Despite the humble situation of the town, the school was great, the education was top notch, and the teachers and administration really cared about each and every student (not hard considering there were 19 people in my class).

We had one of the first Internet connections in our school library in the area. At the time, we were taught how to use this as we approached our first round of research papers when I was in eighth grade (this was probably around 1998). I went to the library and hopped on a computer where I navigated to Yahoo.com like my librarian taught me. I typed in my keyword phrase, "solar energy" and stared at a page full of Chinese and Arabic websites.

So, my question to you is this: In 2008, how many people in Tupelo, OK do you believe spoke Chinese or Arabic? None. this was a testament to the awful search results that existed at the time, and just how bad the Internet really was.

You see, it was pretty easy to game the system back then. Keyword Stuffing, adding the keyword you want to rank on a ridiculous amount of times, was rampant and people knew that if their competitor had the phrase "solar energy" five hundred times on the page, all they had to do was put the phrase on their page five hundred and one times. This was a race to the bottom, but thankfully there was a little company that opened its doors in 1998. That company: Google.

In our next article, we will take a look at the Google Era of the Internet and how it revolutionized the way we do things in every aspect of our lives, but more importantly how they made SEO actionable and important for all of us.

Get Notified When We Add More SEO Articles